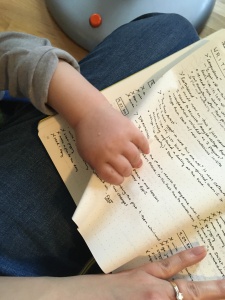 Phew, and another week wraps up–today on a somewhat frustrating note. With the April Surprise snowstorm, we couldn’t get out for our usual walk, so Goldbug–as of this moment, at least–has not napped and is running on fumes. (We’re in full-infinite loop mode, so I’m holding out hope that he’ll drop off sometime this early afternoon, but who knows!)

So in lieu of writing time, I’m throwing this update together and we’ll see if I can sneak some writing time in later.

Got the 3k on the book done M-T, and then moved on to seeing if I could trim “A Splendid Journey” down to within pruning distance of an anthology call. While I do think the story works without the first third, I think it’ll still need a lot of work until I could be happy with it. With the tight deadline on the anthology, I’m now 90% sure this one isn’t going to happen in time. Ah well.

Sometimes you just have one of those weeks.

Inspiring Me This Week…

This week has mostly been an inspiration dry spell, probably as the post-awesomeness of finishing Breasts and Eggs last weekend.

Oh! But I did go looking for mystery walkabout games on the Switch, in the vein of Obra Dinn, but with maybe more Riven-iness. Ended up playing through Gone Home, which was the best balance of spooky, mysterious, with a lovely narrative unfolding as you peel back the layers of the house. Really cool, great atmosphere, and despite being short, incredibly satisfying without jump-scares or monsters or even puzzles (though I love a good puzzle game now and then). Highly recommended if you like narrative-centric games and voyeuristic digging through the detritus of other people’s lives. Reminds me of Amber: Journeys Beyond, though Gone Home is not nearly so scary.

Next week, same time, same place. 3k/novel, followed by probably getting ASJ into some kind of cohesive form, and if there’s time, finishing “Catching College” which needs three or so scenes to be “complete”-ish.

How about you? Was this week a good one or a rough one? Did you take three steps forward or two steps back? Either way, next week is a new week and a fresh start. Be kind to yourself!