Phew. So after doing so great updating this blog on a semi-regular basis, September hit, followed by October, and I fell off the proverbial blogging wagon. It’s not like things haven’t been happening around here. The Little Guy keeps changing every day and keeping me on my toes (and in new changes of clothes every couple of hours–he’s a spitter), and the doctor just okayed him for starting “real” food! Very exciting. If it helps with the spitting up, I’ll TAKE it!

He’s also not much of a napper, which has been the case since the beginning, though he’s starting to fall into something of a normalized schedule and *will* go down for a couple of hours IF I lay down next to him (and Heaven help you if you move so much as an inch). On the plus side, being confined to laying down for two hours a day, I’ve gotten a good chunk of reading done! I’m in the middle of What I Talk About When I Talk About Writing, Haruki Murakami’s running and writing memoir, and I’m just about done with Knight’s Castle by Edward Eager, which I’ve read before a long, long, long time ago, and in an effort to better understand the plot arcs and various development of children’s books, I decided to re-read (and am having a bunch of fun with).

Writing-wise, it’s been scanty. I did have it set up to go over to a friend’s house twice a week for two hours, and sometimes that still happens, but the hassle of packing up the Little Guy, putting him in the car (which, unlike any babies I know, he hates riding in), and getting over there, then awesomeness for an hour and a half or a little more, and then back in the car to have my ears screamed off, etc., etc… Sometimes I just don’t feel like dealing with it. My mother has offered to watch him for a bit every day so I can get some writing done, but I haven’t quite gotten around to figuring out what times I can squeak that in, since she’s starting a new job and has a pretty busy schedule. But~! We may be on the verge of a major life-changing shift because we bought… 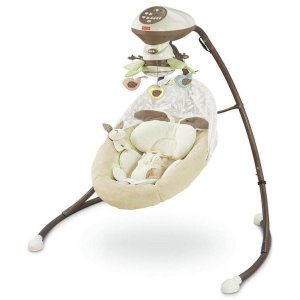 I’ve got to swallow some humble pie here, because my mother-in-law suggested we get one months ago, and I was all like “A swing? He’s already got a bouncy chair, and we just don’t need more STUFF!” Lo and behold: she was right. WRITING PARENTS OF THE WORLD: TAKE HEED! This could be a game-changer.

It kind of freaked him out the first time in it (seemed like he kept thinking it was going to toss him off), but now that he’s settled into it, he loves it. Right now, he’s sound asleep, and has been for the past twenty minutes (and he was happy in it for thirty minutes prior)! This could be revolutionary for getting work done, because the longer I go without getting much accomplished on that front, the crazier I get. I’ve got two novel projects I want to tackle before next May, I’ve got at least 2-3 short stories I could revise RIGHT NOW to get out there circulating the markets, and most of all, I just need some mental time to myself. I love the Little Guy to pieces (he’s so freaking adorable), but there comes a time when you’ve hung out with only a baby for about four days straight when your brain starts kind of flipping out for lack of more sophisticated communication.

What with this swing and figuring out the little-forward-little-back “method” for walking him in his stroller (he also hated that for the longest time–made for fun walks with a screaming baby, but at least he got outside so he doesn’t turn into a mole man), I feel like I’m reclaiming just a little bit of functional time. Maybe I’ll get a hang of this yet!

Apex work has been going well, too. I’m wrapping up the spacing check on an urgent book formatting project, and once that’s done (I think I can have it wrapped on Wednesday, maybe earlier if the Little Guy keeps sleeping like this!), I’ve got another one lined up behind it. I must say, I’m enjoying the hell out of book formatting. I love the font-work, the chapter-header design, the front matter wrangling–I even enjoy the mechanical, systematic space-checking. It’s a lovely compliment to writing, in that I get to work with books without having to create the content. And it’s great to feel like I’m earning a little cash on the side I can use for going to Mo*Con this coming spring and Antho*Con in Portsmouth in June! :D

Andy’s got his final “in school” exam today for med school, and thank goodness. I’m so looking forward to him being finished with testing, though he’s got one more sometime next year (Board Exams). Then we’re on to interview and match season, which is stressful in its own right. Here’s hoping that all goes smoothly and he gets a great residency! Boy, med school’s a bitch, isn’t it?

More later, but I should be more active this week and next. :)