Well, this week has been something of a mixed bag, as you’ll see.

My short story, “The Behemoth Beaches,” is now available for free reading at Apex Magazine! I’m so excited about this finally seeing the light of day (or at least, the light of day for folks like me who can’t always buy an issue of a favorite magazine). This story means a lot to me, written in the throws of sleeplessness at 3AM one night while pregnant with the Little Guy, outraged and inspired. I hope you enjoy it! ^_^ 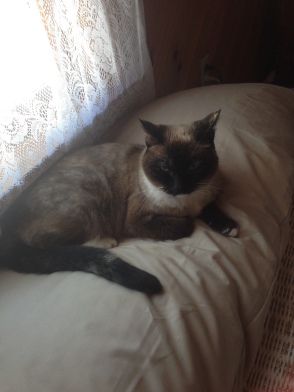 Tuesday night, we had to let go of our sweet, charming, darling Mei. She hadn’t responded to the appetizer stimulant the vet had prescribed, the thyroid test was negative (so no easily treatable issue), and putting in a feeding tube and performing the other tests would have been rough on her. We were all there, though I stepped out with the Little Guy during the final stages, but Andy–whom she loved more than anything–was there with her. He says it was very peaceful. She was a ripe old 18, so she wasn’t a kitten, but we’re still a little emotionally shellshocked that this was the end, and that it came on so fast. She was my muse. She used to sit on my lap quietly while I wrote, only occasionally tilting her head up with a chirp to let me know she was still there, waiting for a kiss on the head. I’d pay my muse’s fee with a peck between her ears, and then she’d be content for another ten minutes before politely requesting another.

We’ll miss you, Mei. There’s a hole in our lives that’s you-shaped, and it aches. Rest in peace, Princess.