(*No, you’re not crazy! You haven’t missed nineteen previous Eat More Veggie ABC posts, I’m just starting with T. I thought it might be nice to share some of the vegetarian (and more often than not, veggie-heavy vegetarian) recipes I’ve been trying out lately. While there have been a few stinkers (too much avocado in a pesto sauce makes it naaaaasty slimy, and I love avocado!), most of them have been pretty awesome, so I thought I’d share for anyone who’s also trying to fit more veggies into their day-to-day.)

Today’s recipe is Thai Red Curry with Vegetables from COOKIE+Kate. 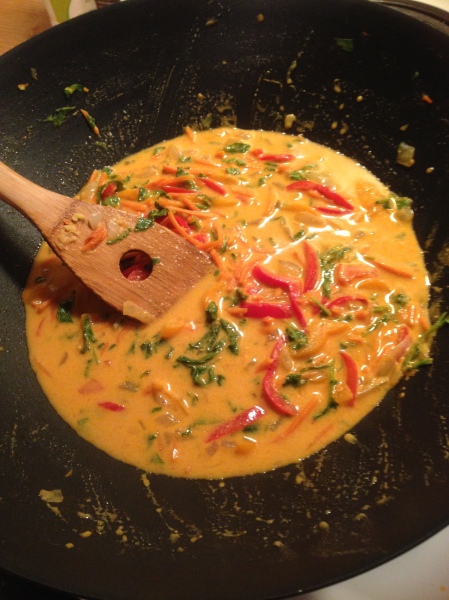 I’m a sucker for Thai food of just about any variety, but I love this recipe for not only capturing that signature red curry flavor, but also for how easy it is. And with a two year old clinging to my legs while I cook, ease and speed is a big plus for me! It also includes a lot of good veggies, and although I worried that the kale might come off slimy once cooked down a bit, it was actually a really nice addition (and not slimy at all!). I substituted baby kale instead of going to the trouble of stemming adult kale, and I swapped the carrot rounds for pre-shredded matchstick carrots (because one less thing to chop up = awesome in my book). So prep-wise, all I had to do was chop up the onion, slice the two bell peppers and shred the kale a bit, and grate some ginger. (I keep my ginger in the freezer, which makes it super easy to peel/grate/chop, and I use squeezable diced garlic because = easy.) The curry itself is literally just coconut milk, curry paste, soy sauce, rice vinegar, and a little water, which makes me think I could use this as a base for almost any corresponding flavors (I was eyeing our sliced mango but opted to try the “pure” recipe first to see if the flavors worked on their own). I also used instant brown rice, because = easy. (Picking up on a trend here?)

Sriracha sauce is recommended as a side, and although the curry is fantastically sweet and delicious on its own, I loved the addition of just a smidge (like, literally less than a 1/4 tsp.) of Sriracha. It gives it a tiny bit of heat, but doesn’t compromise the flavor at all.

Definitely a keeper for us!