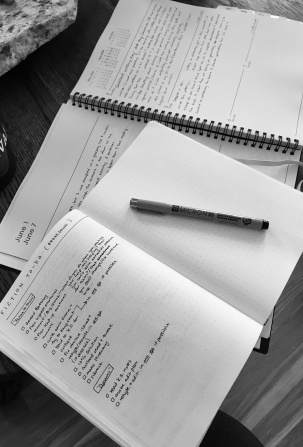 Somewhat less than a productive week, though not a complete waste. Early on I got a little work done on “Candyland,” a short weird story about how far we’ll go to present a good picture of our lives on social media. I’ve reworked the beginning, cut out a lot of fluff, and am translating over a new dialogue passage bit by bit. So I’m about 2/3 done on this current pass, and after I get that retyped, then hopefully I’ll be able to move onto the 10% Solution word-cull, which will then lead to hopefully the last out-loud reading pass and last minute tweaks, and THEN, I’ll be able to get it out into the world.

Which I really, really need to do, because my stable of submittable stories is getting painfully low. I’ve been trying not to stress myself out about it because this year has already been a very good writing year, but I’m so excited by how well things have been going, I want to capitalize on the momentum.

But Goldbug’s been teething, which means spotty naps and cranky, cranky baby, which has made getting much done during nap times almost impossible. I kind of hit a wall yesterday around dinner time, when I made myself nauseous by eating spicy Indian food too fast (oh, but it was soooooo goooooood–Vindaloo is the most magical of spicy sauces) while Goldbug howled in the background because I’d dared to put him down for a few minutes (because I can’t eat holding him, as he’s decided he’s an octopus and grabs at EVERYTHING in a three-foot radius), and it had been a long day and I was exhausted and had been stressing out all day about what we’re going to do for B-Bug when school starts in the fall (homeschool or off-and-on school, as he tends to get tons of colds during the regular school year, and if those symptoms are now worrisome for COVID, then will he even be allowed to attend regularly, etc.) and everybody was talking at once and I just…man, I just needed to lie down for a bit.

Nausea passed, and I feel much better now, but that twenty minutes of stillness was…magical. And it made me realize that I really, REALLY need to build in some quiet/meditation time that doesn’t involve anybody touching me or talking to me or screaming in the background (hello house with a six year old) or my phone or anything. Just…stillness… For five minutes, even. Just, something, for a little bit, when I can hear myself think.

Inspiration-wise, I haven’t had much this week, though I did get a few books (notably, The Weird edited by Ann & Jeff Vandermeer, which I’ve gone through and flagged every 5k> story to start with, which I’m looking forward to using for my daily short story reads). I also finally bit the bullet and ordered a couple pairs of jeans, because I seriously need to get out of maternity clothes at this point. One: they don’t fit well anymore, and two: I want to start feeling like a human again, actually picking clothes I like to wear, rather than just slumming it in my pajamas all day because why not?

Otherwise, a somewhat unremarkable week, characterized by lots of fussing and stress. Hopefully next week will be better!