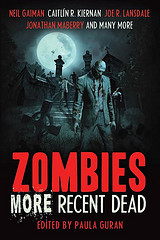 If you’re tired of all the modern-day twists on zombies and want something eerie from a deeper past, look no further than “What Still Abides” by Marie Brennan. Set in pre-Christian England among druids and runes, Brennan weaves a chilling tale of death gone wrong. When a corpse refuses to stay down in his grave, the strongest magics and warriors come to the ruling eorl’s aid. But can anything be stronger than Death itself?

This story is chock full of mood and atmosphere; I dare anyone to turn the page on this one without feeling the chill of the  moorish winds.

1. The Writing Question: What is your typical writing routine? Do you write every day, some days, only when inspired?

I’m a night owl, and always have been. It’s like my brain turns on at ten p.m. Since I’m lucky enough to write full-time (thanks to the support of a gainfully employed husband), this means I work at night, usually going to bed somewhere between one and three a.m. When I’m working on a novel, I write nearly every day, with a minimum wordcount I have to hit before I let myself stop for the night. In between novel drafts, though, it’s much more hit-or-miss.
2. The Zombie Question: What enticed you to writing this zombie story?
“What Still Abides” is inspired by the English folksong “John Barleycorn,” which is one giant metaphor about the making of beer. The last line is “and we shall drink his blood!” — i.e. the beer — but that made me look back at all the lyrics about the awful, violent things they did to try and kill John Barleycorn, and ask myself what would happen if I took them literally . . . .
3. The Random Question: What other projects do you have forthcoming that you’d like to share with us?
I’m currently writing Chains and Memory, the sequel to an urban fantasy called Lies and Prophecy that I published in 2012. That will be out in early 2015, around the same time as Voyage of the Basilisk, the third of the Memoirs of Lady Trent.

Marie Brennan is the author of nine novels, including the series Memoirs of Lady Trent: A Natural History of Dragons, The Tropic of Serpents, and the upcoming Voyage of the Basilisk, as well as more than forty short stories. A Natural History of Dragons is a finalist for the 2014 World Fantasy Award. More information can be found at swantower.com.