There was a while there in June when I thought there was no way I’d make reading 25 books this year. What with the Little Guy’s arrival and that whole adjusting to mom-hood thing, it never seemed like I had time to read. But miracle of miracles, I did it! *glows with accomplishment*

That said, I’ve already got a sizable to-read list forming which will be somewhat tricky to get through if I also include my stack of 50 unread books, so we’ll see what actually gets read this next year. I’ll be posting my 2015 goals shortly, of which one will definitely be a reading goal.

But this post is for celebrating the best of the books I read, the ones that have really meant something to me this year and stood out from the rest. They are (in no particular order): 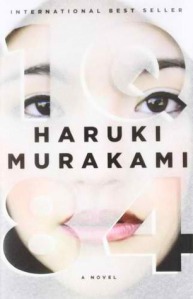 Weighing in at almost 900 pages, this is actually almost three books in one (and sometimes is published as three separate volumes), but it’s one complete story. I thoroughly enjoy Murakami’s work already, so the fact that I enjoyed this one shouldn’t be too much of a surprise, but this one doubled-down on all the elements of KAFKA ON THE SHORE and THE WINDUP BIRD CHRONICLES that I enjoyed. I’ve tried to quantify those elements here.

Looking at it as a writer, I particularly appreciated the personal connection I felt with his characters. In each of his novels I’ve read so far, I feel like I know his characters personally. They’re incredibly real and believable. I’m also drawn to the mix of the surreal and the totally mundane, everyday events of life. Somehow, Murakami can make shopping for groceries and ironing fix perfectly beside talking cats and otherworldly assassins. In addition to this mix of realism and weird, I absolutely love how carefully he eases his characters (and his readers) into strange, out-of-place things. One strange thing happens, but it’s only sort of weird, so the character swallows it and moves on with a shrug. Then something else happens, but it doesn’t seem so weird after the first odd thing, so they accept this, too, and move on. By the time we reach the climax, things have gotten so freaking weird one tiny baby-step at a time, that suddenly the character realizes how messed up everything is, but it’s way too late to stop anything or get back to normal without a major climactic event that will eventually bring everything back to the way things were before.

I also love how he takes two seemingly unrelated storylines and intertwines them by the end of the book, and I also adore the sense of place/tone/mood he establishes. I want to be where he describes. Every time I pick up one of his books, I end up wanting to iron clothes and listen to classical music. It’s deeply satisfying. 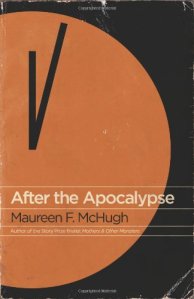 2. After the Apocalypse by Maureen F. McHugh

This is a very quiet collection of apocalyptic and post-apocalyptic tales. It’s far more literary than in-your-face genre, so those looking for huge explosions and rotted out cities, etc. may find themselves disappointed. There are zombies, A.I., roaming gangs, viruses run-amok, but much of this collection takes a look at the subtler, longer-term impact of these kinds of events, with much of the heavy action taking place in the backstory. The reader is left to wonder what the worse apocalypse is: the annihilation of life as we know it, or a mother running out on the responsibility of taking care of her child in the wake of such devastation, or a man becoming a monster in the midst of his own permanent exile, or the deletion of a beautiful and dangerous sentient being due to ignorance?

As a writer, I appreciated the detail and grace of the prose. It’s very literary in its themes and ideas, but incredibly approachable. The prose is smooth and effortless, but the characters and settings are carefully crafted and realized. I also appreciated the balance of SF with realism, and the subtlety of that mix. Some stories may not even feel 100% genre, but they’ll still leave you pondering, which I love.

Most importantly, these stories will stick in your brain. Months later, I was thinking about A.I., and I remembered instantly one of the stories in this collection, and recommended it to a friend. As a slush editor in the past, that’s what I looked for as that “special something”  for a short story. These stories made me want to read her novel-length work.

3. We Have Always Lived in the Castle by Shirley Jackson

This may be my favorite book of the year. If it’s not, it’s neck-and-neck close. Previously, I’d only read Shirley Jackson’s short story, “The Lottery,” in school on several  occasions, and while I appreciated it, I did (and to some degree, still do) consider it a bit overrated. It’s best read once or twice, but after that, the shock value is gone, and the delight of knowing what’s coming has worn off. For this reason, I’ve never approached her other work. In fact, truth be told, I never even knew other work existed until I attended a horror convention in Portsmouth a few years ago, and someone mentioned her novels. People I deeply respect raved about them, so this year, I finally decided to check out WE HAVE ALWAYS LIVED IN THE CASTLE, just to see if the praise was yet again overrated.

It was not! For those of you who have read THE YELLOW WALLPAPER, this is a book as near to a sister or cousin to that style of deeply disturbing, creeping dread as any book could be. Shirley Jackson blew me away with this one. The underlying creepiness is subtle but gathers strength as the story unfolds, giving the reader an eerie, carnival-mirror glimpse at rural, New England life. The narrator is one of the best unreliable narrators I’ve come across, and the sense of place is striking (especially to those, like myself, who are intimately familiar with New England and its inherent spookiness).

Another thing I love about this is that it’s a novella. I adore novellas. Something about their length charms the hell out of me, and this one is an excellent example of a novella done right. It says so much, but avoids verbosity. The prose is clear and concise, and the plot sticks to the point with dedication. And it’s a page-turner, without needing explosions or gunfights or swearing or anything that otherwise typically constitutes a “page turner.” The subtle social tension is incredibly gripping, and despite being so short, I found myself deeply invested in the welfare of the characters. It’s rather like a modern gothic tale, if the gothic element could tell the story itself. A delightfully dark read!

4. The Child Thief by Brom

So often, I find that stories with really awesome illustrations fall short of delivering at the same level as their accompanying art. But this one TOTALLY DELIVERS. I love the Peter Pan retelling. It’s gritty and terrifying, but still uplifting in its own weird way, and it’s superbly plotted.

It had me at the edge of my seat from one chapter to the next, from one scene to the next. Brom very thoughtfully reworked the predominant characters in the original mythos, and I loved the uncertainty of who to consider the heroes and the villains. It achieves that great effect of making you both a little afraid of the heroic characters, but also really, really, really like them & their scariness. Of almost all the books I read this year, save maybe 1Q84, I wanted to be in this story. These characters became my friends.

One downfall: whenever I put the book down, I didn’t always have that burning desire to pick it up again. I have no idea why. I loved, loved, loved it when I was reading it, but it vaporized when I set it aside. Weird, but notable, because I remember it with adoration.

I won’t go into detail about this one, as I’ve already reviewed it in this post, but it was lovely, lovely, lovely, and I can’t help recommending it to people. It’s no relaxing read, but it’s marvelous, manic, and fantastic.

Honorable Mentions: The 10% Solution (an editing guide recommended by Jenn Brozek years ago, which I’ve been using non-stop this year, and has really helped me tighten my short story word counts), and The Weekend Novelist (recommended in Peter M. Ball’s blog post about plotting, which really illuminated some important elements of the three-act structure for me which previously I couldn’t wrap my head around).

And there it is! I’m still thrilled to peaches that I managed to not only meet my goal of 25, but surpass it by one! ^_^ I wish I’d read a *bit* more current short fiction, but may work on remedying that this coming year. Look for the 2014 Goals Wrap-Up & 2015 Goals post soon!