Not too much to talk about writing-wise this last week. Made some progress on the slow-moving novel, though it’s been a bit more back-and-forth on Chapter 6 than I was hoping. I’m eyeing my May deadline warily–it’s going to take a big push to get this wrapped up by then, or even to hit 50k on it, which is my overarching goal for FY11. I just keep getting distracted by short-term projects, new ideas, toying with script writing, among other things. But if I get nothing else done by the end of May besides the novel, I’ll be all too happy. :)

I’ve been watching a lot of documentaries lately, many specifically in the subject of fashion. I’ve admitted before that Project Runway is one of my greatest weaknesses, but it really spans to all fashion/design/clothes-making arenas. Perhaps its an issue of opposite attraction: I’m not fashionable, at all. But I’ve got some significant admiration for those who are.

It’s not just appearances either, because while America’s Next Top Model is a fun show now and then, I care less about the people actually wearing the clothes than I do about the people making them. There’s something that really speaks to me as a writer to hear designers talk about collections, stories they’re trying to elicit through fabric, and the importance of an “editor’s eye” when evaluating a design. All I know is that after watching any fashion-oriented show, I’m crazy to write, to do fiction collections, to write a series of stories that conjure what it means to be Spring, and to edit my older stuff ruthlessly.

Though I am glad no one’s challenging me to write a completed (albeit rough) draft of fiction in the same 24 hour rush as the designers on Project Runway. I’d be the one freaking out and doubting my original plan, all while Tim Gunn frowns thoughtfully at the two paragraphs I’ve actually managed to finish with a sigh and his characteristic “Make it work.” 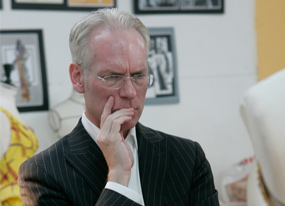 Tim Gunn: “The character just feels a little…tortured. Do you know what I mean?”

Tim Gunn: “He’s just kind of stuck where he is. The plot’s dragging.”

Tim Gunn: (concerned look) “I mean, what you’ve got so far is good. It’s really good. You just need more of it. More movement.”

Me: (back-hand wipe-off of tears, clenching draft papers in hand, frowning with renewed frustration as I walk back to my desk. low mutter) “Make it work, make it work. Shit, I thought that’s what I was doing.”

Meanwhile, back in reality where Maggie isn’t chatting with her own personal Tim Gunn: I need to resub a story that came back almost a month ago and while I meant to get it right back out again, I forgot, and it’s been languishing on to-do list. This is why I give myself a sticker for turning a rejected submission around in less than 24 hours. Otherwise it just sits there.

Other than that, life goes on!

2 thoughts on “The Monday Issue”