So most of you know that yesterday was my twenty-third birthday! Hooray! I’m older now! Many of you may not know that it was also Andy’s first day of Chiropractic school. I drove him in yesterday morning and dropped him off for his orientation (10-4), and then I went grocery shopping for the things I needed to make dinner and my birthday cake. ^_^ For dinner, I wanted to have Vietnamese spring rolls from a recipe my mother has often used. It’s a delicious dish, and I was more than a little pleasantly surprised to find that Walmart actually had everything for it. Crazy! In fact, it’s the only place so far where I’ve found both the rice paper and the bean noodles. Dirt cake is a lot easier to make, so I wasn’t as surprised about finding those ingredients. ^_^

Drove home from there and promptly got cooking. It was strange, but not having Andy around the apartment puts me in a really productive, I need to do things, kind of mood. I can’t just sit around by myself. That’d be boring and not a little pathetic. So I cooked. Got the dirt cake all ready (I was very impressed at my insane cookie-blending skills, considering I have no food processor and had to use only my rolling pin), because it needed to chill for a while. Also cooked up the bean noodles and then the chicken for the spring rolls. Actually, I was really productive and didn’t even sit down to play video games once all day yesterday! Now THAT’S nuts.

Got a bunch of calls from family, which was fun. It’s always nice to hear from you guys. ^_^ I had finished getting everything ready, and had just sat myself down with a pack of Twizzlers to play Zelda when Andy comes home, done with his orientation day 1. Yay! I really missed not seeing him all day. It’s going to be pretty intense over the weeks, since (I believe, from what we know–look for a correction if this ends up being wrong) he’ll be in classes M-F from 7:30am-4 or 5 pm. O.O!! Loooooooong days, but at least he’s studying stuff that will all be useful when he becomes a chiropractor.

After hearing about his orientation, we had dinner, and though he says it was fine, I overcooked the chicken a little. :-\ Ah well, it was still pretty tasty (it was the texture of the chicken that was off a little). Then we had dirt cake, and thankfully that’s almost impossible to mess up. ^_^ It was extra yummy. 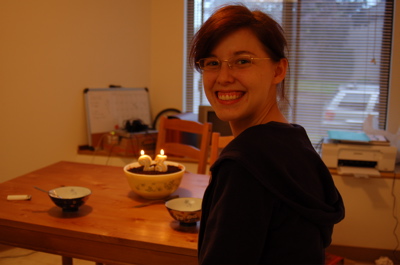 Then we, meaning I, opened presents. Andy got me the new Enya CD (which I’ve been drooling over, see below), and a nice bottle of Disaronno, which we haven’t had in far too long. We both had a little of the Di in our tea cups (the white, handless, asian-inspired ones) with icecubes, and it was just marvelous. I also got a fair bit of tinder from other relatives, which I’m very much looking forward to spending without feeling guilty! (It certainly helps that Andy should be getting his financial aide check today which covers living expenses like rent–makes me much less likely to just put the checks in the bank and use them for groceries, which is just not that much fun.) I had pretty much already decided (since I can’t really afford the sofa I want) that I would put some of the money toward a nice bookshelf from Ikea, because I’m ready to put away all the books/DVDs/etc. that have been laying all over the living room floor since we moved in, and because I would feel guilty buying more books only to pile them on the floor in a corner. Then I figured with some of the other $$, I’d buy me and Andy the two print posters we’ve been dying for: 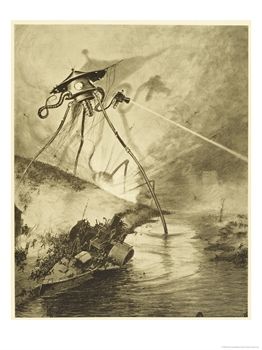 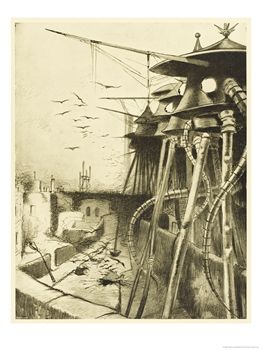 I can get fairly cheap frames for them, and getting those up on the walls will make this place feel a little more lived in. That takes up most of the money, but leaves me with enough for a few books, including *drum roll please* the enormous textbook on Jupiter that I’ve been eyeing for the last few months. It’s a book I really couldn’t buy if I didn’t have gift money, because it’s so expensive, but it looks absolutely fabulous, and actually will help me with writing. YAY! As for the other few books, I haven’t quite decided what I’ll get just yet. I’ve got a couple of ideas, now it’s just narrowing the list down.

To top off my birthday, we watched Desperate Housewives into the evening until we were both so tired (and stiff from sitting on the floor) that we went to bed. Sounds like a great birthday to me! ^_^

Oh! And my interview with poetess Brandy Schwan is up on the Apex Magazine website! She’s a very interesting lady, and a very fine poet. Check it out! There’s also a lot of good short fiction up, so feel free to read those too! ^_^

Determined at last that my “Mt. St. Helens” approach does not work. Or at least, it does, but it works literally like a volcano: it goes off once every couple hundred years. Unfortunately, a writing career probably can’t be built off of that.

So I’ve structured myself again. My requirement is 500 words or 1 hour of editing a day. I figure at least if I’m not putting new words on the page, I’ll at least be getting a lot of other stories ready to be submitted. So far, I’ve managed to exceed my 500 word requirement easily.

I’ve been beating my head against the wall for new story ideas lately, and I’ve been stumped. So the day before yesterday (here’s the part about the Enya CD) I sat down to just get some ideas flowing. For me, Enya is the best fantasy brainstorming music. I just can’t help but think of amazing, magical places when I listen to her music. So I turned on iTunes and for each song that played, I wrote what came into my head. At first, I tried to make them actual stories, but then I gave up and did what I really felt like doing when I listen to music: come up with a bizarre setting and maybe a few quick characters. Now I’ve got some real nifty ones, AND I exceeded my 500 word requirement for the day. Hooray! I’ve also learned that setting/mood is my natural starting point for stories. Characters come next, without much difficulty, but it’s conflict for me that’s the real tough part. Maybe I tend to avoid conflict as much as I can in real life that it’s kinda seeped over into my writing? Oh no! Must remedy! Anyway, at least now I know.

I’ve been trying to keep in mind that most of what I’m writing right now is practice. It doesn’t have to be great. It doesn’t even have to be good. It’s just keeping me in shape and making me utilize new skills and techniques. So I sat down today to just explore a setting I’ve had on my mind for a while, and ended up with 2,000+ words and something I think could actually turn into a story, if I let it. It’s just practice, and I’m not worrying about word count/limit or where I could submit it–I’m just having fun. Man, back when I was a kid, I literally used to sit down and write for seven hours a stretch and have a blast doing it, too. I need to get back into that again. Very fond memories of those years, and of writing in those years.

“Mimicry” is out to it’s next two cold readers! Hope you guys have some fun. I know I had a blast writing it. This is the story that will be going to the L. Ron Hubbard’s Writers of the Future contest, this coming quarter.

1 thought on “HAPPY BIRTHDAY TO ME, and other random tidbits.”